In order to document rather than just illustrate, rear view drawings contain information about port assignments and cabling.

In the early version of my stencils these shapes were just boxes with rows and columns and editing was done by manually editing cells. To make life easier I made pre-populated port assignment boxes. This approach worked quite well with disk shelf SAS cabling as there is only limited number of ways to cable SAS shelves (and follow NetApp best practices). 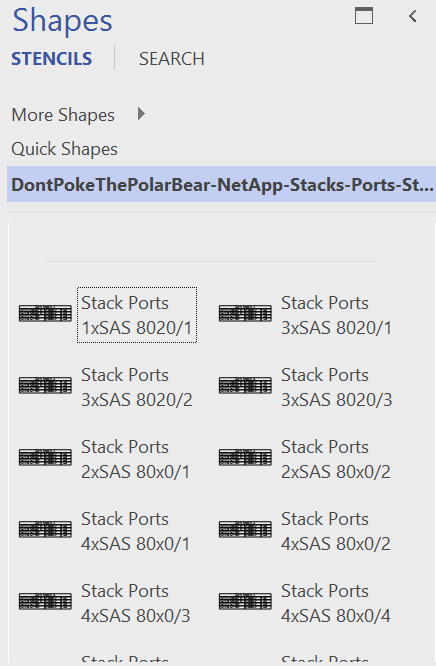 With this decision number of possible port combinations sky rocketed, so manually editing ports cell by cell was becoming too cumbersome. So instead of editing port information manually, possible port end-points are lists and can be manipulated in Shape Data window by using pull-down menus (see example below). Like with disk size rather than storing the values for the lists within the shape (or its shapesheet to be exact), the master shapesheet (or TheDoc) is used. This way If I have to add new end-points, I have to edit just few lists on document master shapesheet, rather than updating each shape individually. 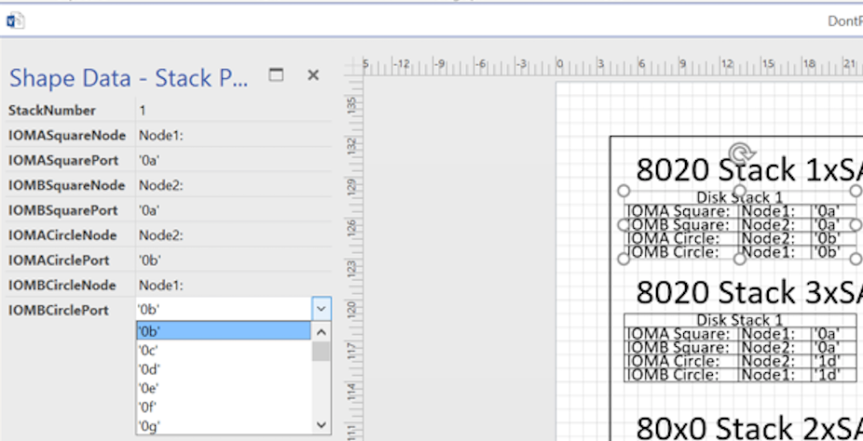 SAS Stack Port assignment box was designed with assumption that SAS port naming convention would be constant, i.e there would either “Square” or “Circle” ports. I have quite liked this naming convention, I am sad to see that it is now gone with new 12 Gbps/s SAS ports.

Why I liked the naming convention? “Square” and “Circle” are not just words, they describe a shape and that shape can be used to code information and give visual cues. In case of SAS cabling shape, there are two possible types of cable ends, “Square” and “Circle”. “Square” cable ends should connect to “Square” ports and so on. So the cable is somewhat self-documenting and you have visual cues about correct cable usage.

With new IOM12 SAS module in disk shelves SAS ports are just numbered and SAS cable ends are not so descriptive as they used to be. IOM12 SAS has four ports: 1,2,3,4. If normal dual-path HA SAS cabling is used port “1” is equivalent to “Square” port and  port “3” is equivalent to “Circle” port. I have to update my  SAS port shapes, in the mean while, just use old boxes and map port numbers either to “Square” or “Circle”.

With four ports per IOM module you can now use new cabling schema “Quad-Path HA”. This will give more bandwidth per controller, which might be required as SSD media is getting faster with new technologies like “NVMe” and “3d crosspoint”. With this schema “2” ports are essentially “Square2” ports and “4” ports are “Circle2” ports and should be cabled with similar cabling rules like “Square” and “Circle” ports. Quad-Path HA requires also new port assignment boxes, making them will take some time.  I’ll hold on with these   until I have more experience/insight on Quad Path HA.

SAS port Assignment boxes for new FAS9000 / AFF A700 are still under development. In the meanwhile use existing FAS8200 port assignment boxes and adjust ports as needed, SAS Adapters are most likely in different slots than with FAS8200, check slot  assignment for FAS9000 from hwu.netapp.com 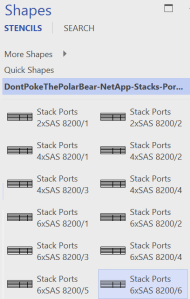