Last year when I was working on the official Nutanix stencil set, I discovered a new way of reducing the size of  complex (background) images. In post Visio by DPTPB: Reducing size of complex Visio shapes V2 I described how to:

Above technique is based on using “Windows Enhanced Metafile” images and “Paste Special” feature.

Why is this technique beneficial?

Resulting single object image is (much) less complex and (much,much) faster to use than image made of multiple objects. A good way to optimize your complex Visio shapes (and reverse engineer and modify existing third party Visio shapes).

Unfortunately there was a tiny issue with the solution…

Alignment box is too large…

There was still one minor issue that I couldn’t figure out how to solve. Whenever you pasted the image back as Windows Enhanced Metafile, the dimensions of resulting image were slightly larger than the original image. This was because for some unknown reason Visio adds some slack between the actual image and the alignment box around the image. Additionally the image is not centered within the alignment box.

Visimation, who originally described the  “Windows Enhanced Metafile + “Paste Special” technique their blog post ,also touched briefly the subject of making alignment box smaller, but did not describe the actual steps how to do it.

The extra slack and offcentered positioning causes some problems with positioning the image. You can not use formulas like “parentshape.width*0.5” and parentshape.height*0.5 to position the image exactly in the middle of a parent shape. If you try to, the image won’t land in the position you desire, as there is a small offset in both X and Y axis.

While not a huge problem as you can manually position the image roughly in the middle of the parent shape, but still mildly annoying.

Since having a slightly too large alignment box for Windows Enhanced Metafile images was not that huge problem, I didn’t spend too much time by figuring out how to fix it and quickly moved on.

Few days ago I was watching television and browsing through Visioguy forums with my phone. I was looking for solution for totally unrelated issue and stumbled on discussion where someone was talking about using Visio tool called “crop”.

While fairly familiar with Visio, I had never used this tool and had never even heard about it. On the following day I got back to my computer and tried to find the menu where “Crop” tool is, I soon realized why:

The menu for “crop” tool is hidden most of the time

“Crop” tool is part of “Picture Tools” set, found under Visio ribbon bar tab “Format”. The strange thing is that “Picture Tool / Format” tab is only visible when an object of “picture” type is selected.

Problem with the alignment box

example: bottom left corner of example above at 6400% zoom

example: top left corner of example above at 6400% zoom 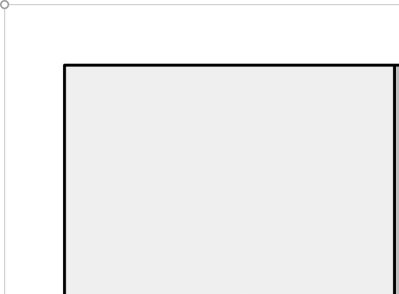 example: top right corner of example above at 6400% zoom

Example: Using simpler shapes to better illustrate what is happening

Example: the same example as above, but with extra slack cropped a way

Using Crop tool to get rid of extra slack

While this solution is not perfect (yet?), you can get rid of most of the slack and offcentered positioning.

Why isn’t it perfect

example: the”Width & Height” of the actual image within non-cropped image 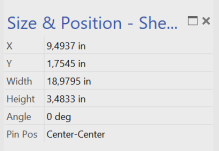 Another Visio mystery solved. While not a perfect solution, good enough for me.

Is cropping worth the time and effort required?

It is up to you whether you want to take the time penalty with manually positioning metafiles with slack space around them or spending some time getting rid of slack space around metafiles to get ability to position the shape by using formulas relative to parent shape.